Provide care to your patients during COVID-19 - Take your practice online with our Teledermatology solution!Learn more

Success Or Failure: Where Is Teledermatology Set To Stand? - Part 2

Part I of this article discussed how in spite of teledermatology’s relatively short history it rapidly became a widely used technique. Compounding its innovative remote telecommunication features since the mid 1990s has optimized operational efficiency making it a practical component of practices worldwide.
Even though such technology has been adopted by many countries for its connective capabilities, the United States still lacks a nationwide teledermatology program mainly as a consequence of technical and regulatory obstacles.

Part II will explain how two nations successfully overcame administration barriers similar to those which the U.S. is currently facing. This will be done by discussing the factors which supplemented widespread teledermatology adoption, and also introducing how other techniques may support its future promotion.

Case 1 - Brazil
A convincing case in Brazil demonstrates the benefits of teledermatology when utilized to its full potential. The nation made a 60,000 person wait list vanish in just 6 months by classifying and prioritizing images of skin lesions using an artificial intelligence-powered dermatology software, similar to DermEngine. Surprisingly, 42,000 of those patients were not required to see a dermatologist, and therefore were referred back to their GP for further treatment.1 The advances in telecommunication technology have enabled teledermatology in Brazil to resolve a national crisis in less than half the expected time - a potent approach that can also contribute to the early detection of skin cancer.1 A similar teledermatology initiative taking place in the U.S. would potentially declutter everyday practices, and provide essential care to those belonging in high-risk populations. 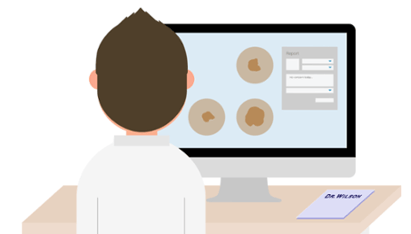 Case 2 - The Netherlands
Nearly 20 years ago, teledermatology research was conducted in small regions of the Netherlands and quickly expanded following wide user acceptance.2 Health institutions contracted medical professionals and took full responsibility of consultation quality control, thus promoting a complete integration of teledermatology into their national health system.3 This strategy attracted the interests of medical insurers, who began to offer full reimbursement for teledermatology services - a long standing barrier currently faced by American practitioners.3 As a result, system-wide cooperation created a cost-effective and simplified dermatology operation through standardization and reducing the amount of insurer intermediaries. Contrary to the U.S., medical institutions in the Netherlands embraced the use of teledermatology and completely bypassed regulatory complexities by accepting full responsibility of teledermatology practices early-on in its application.

Positive Movements for Teledermatology Implementation
Looking ahead, governing health bodies should build on the strategies of Brazil and the Netherlands to overcome similar challenges in the United States. Intelligent dermatology software such as DermEngine are already capable of addressing the large demand for faster quality health care, with user acceptance proving to “significantly influence the [mass implementation] of teledermatology.”3

To further encourage teledermatology adoption in other parts of the world, these factors should be supplemented with a well-rounded, standardized training framework. Current medical workers and even residency programs could then contribute to consistent and improved practices of teledermatology.3 With its universal application, dermatology experts would also become accustomed with other practices’ methods, and therefore grow their professional network with less difficulty to improve patient consultations and referral processes.

Conclusion
As discussed in Part I, the lack of regulatory cooperation from state-to-state in the U.S. has hindered its teledermatology implementation. However, Brazil and the Netherlands have found a way to utilize modern technology in teledermatology and address technical issues head-on. Furthermore, successful onboarding of government agencies, health institutions, and medical workers, promotes user acceptance and accelerates widespread teledermatology adoption, effectively decluttering health systems while providing care to priority patients. Such a tactic forms a synergy in teledermatology which could be used to establish standardized training among dermatology specialists. Regardless of the components making up teledermatology in a region, the trend of early and committed support has strongly influenced its prevalence. Teledermatology stakeholders should strive to come together and create regulatory similarities in large-scale implementation, rather than differences.

Would you like to stay updated on the latest news of MetaOptima and its teledermatology software, DermEngine? Subscribe to our blog! If you're ready to experience DermEngine's intuitive features firsthand, request your demo today!

Register for a Free Online Demo

Curious about how DermEngine can benefit your practice?

Talk to a product specialist and have all your questions answered.